The ultimate Naruto game on PC

<>
NARUTO SHIPPUDEN: Ultimate Ninja STORM 3 Full Burst is an action game that takes place in the manga universe of Naruto. With a wide range of characters and plenty of scenes, the game will certainly keep fans of the series happy with its splendid graphics, which includes all extensions made to the original Ultimate Ninja Storm 3. This new Naruto continues in the footsteps of its predecessors, although it's the first release to be adapted for PC. This is a fighting game in the world of Japanese animation, which offers quite a rich story mode: a wide variety of battles interspersed with numerous cut-scenes. These scenes are great but there are a huge number of them (about half a dozen on average between each fight): a blessing for fans of the series; but a nightmare for others (although you can skip them).
The NARUTO SHIPPUDEN: Ultimate Ninja STORM 3 Full Burst story mode is interactive and regularly gives you the choice over which direction the story will take. This is a good point and is staged in a very dynamic way! Note that the fights are stuffed full of special moves and you can unlock a large number of characters and new techniques.

The fights are at the heart of the game, and we must admit they're very neat (as per usual in the series). The excellent production supports the epic scope of these highly dynamic battles, where special tricks and other illusions burst forth on all sides while you teleport behind your opponent to deal him the coup de grace.
This is all very good, but fans who are there primarily for those fights may be frustrated by the omnipresence of cut-scenes that are always breaking up the momentum. Note also that the joystick is almost indispensable for real enjoyment of the game, even though the keypad can also be used...at your own risk.

Great graphics and sound success despite the questionable PC adaptation 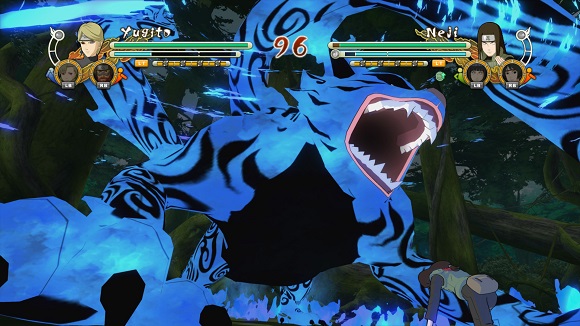 Since the launch of this Naruto, there's been one obvious observation: the production is impeccable and a real treat for the eyes. The feeling of playing a cartoon is omnipresent, the character modeling and loyalty to the anime are faultless and it's always a pleasure progressing through the game. The music and dubbing are excellent, reusing the Japanese voices and the atmosphere of the famous cartoon.
However, the PC adaptation of the NARUTO SHIPPUDEN: Ultimate Ninja STORM 3 Full Burst simply isn't good enough. While we appreciate the opportunity to play in HD 1080p, the version brings with it certain console limitations: the refresh rate of the image is limited to 30 frames per second, and the optimization of the game is flawed. Even with a more than decent configuration, there are many glitches that slow things down with the vertical synchronization and oversampling enabled. It's a pity that the editor didn't go to more trouble on this PC adaptation that is sloppy to say the least, as is too often the case with the Namco Bandai console adaptations.

Our verdict: a treat for the fans, others will perhaps give it a miss

NARUTO SHIPPUDEN: Ultimate Ninja STORM 3 Full Burst is practically a must-have for Naruto fans. There are many epic battles, and the quality of the production and the cut-scenes is undeniable. However, those looking for a good fighting game may be frustrated by the omnipresence of these cut-scenes that easily account for half the game time. And what of this PC adaptation that is dubious to say the least? Naruto is an underwhelming game, one that may greatly please its fans but leave others cold.